Facebook Is Testing Self-Destructing Posts, the Latest Innovation in Its Feud with Snapchat 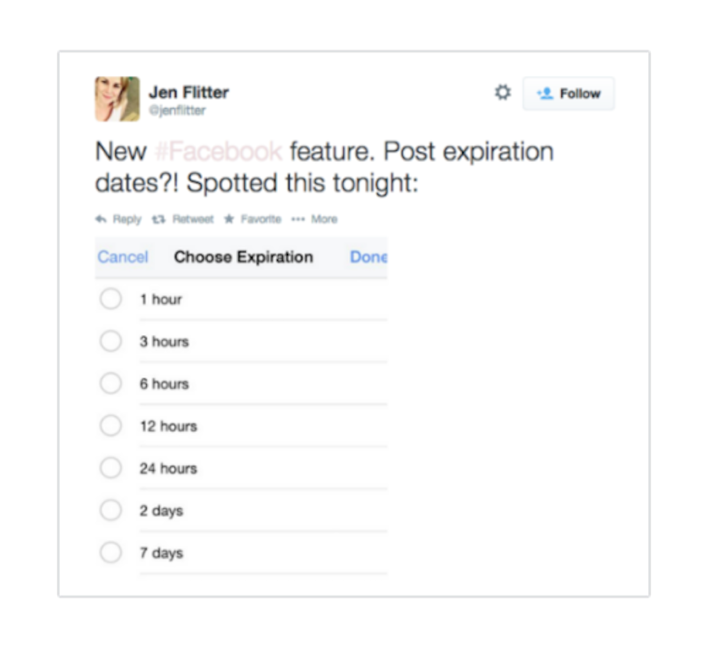 Posting on Facebook is great and all, but sometimes, you don’t want to leave your posts out there forever in cyberspace. Sure, you can go and individually delete them all, but that could very well take forever, and who has that much time to mess with it all? It’s recently been revealed that Facebook has been testing out a feature which would allow users to make their messages self-destruct after a certain amount of time. As of now, it has only been spotted on certain user’s mobile Facebook apps for iOS. This is seen by many as an attempt to make Facebook look more like Snapchat.

This feature is great, but we all know by now that all it takes is one screenshot before your self-destructed message can be viewed by the online world once again. (Solution: don’t post anything controversial that you wouldn’t want people to see on your Facebook page). Have a look at the self-destruct option’s screenshot below:


As is clearly seen above, you can choose for your message to disappear in an hour or in a week – the choice is all yours. What is not clearly seen or known, is how long Facebook will be testing out this feature, or if they will ever make it a permanent addition. Do you think it should be a permanent change?

Are you able to make your Facebook posts self-destruct? Let us know in the comments section below!