Photoshop CC Cracked In Under 24 Hours

Adobe announced back in May, that it was set to drop it’s Creative Suite as a boxed product, instead the company decided to focus wholly on offering its software via a subscription service. On June 17 2013, those subscriptions launched from the Adobe website with customers paying in the range of $19.99 and $74.99 per month for access to Adobe’s suite of applications. 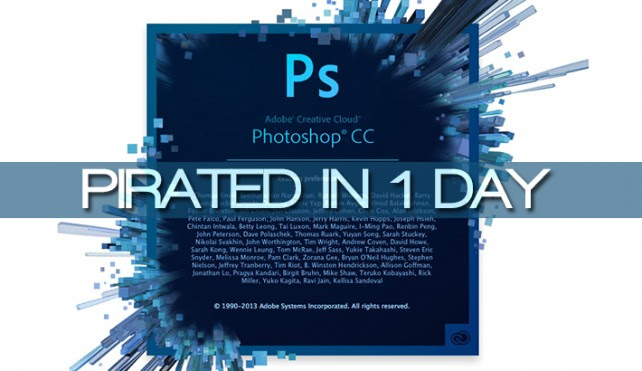 A server connection is required to verify legal copies on a regular basis, but that’s not a 100% guarantee illegal copies of the software can’t and won’t appear. Proof of that comes in the form of a cracked version of Photoshop CC, which was made available in less than 24 hours after the subscriptions went live.
Adobe had thought that releasing its software via a subscription service would cut down on piracy of its products.  However, a torrent for the subscription version of Photoshop CC has appeared on The Pirate Bay. The torrent file is named “Adobe Photoshop CC 14.0 Final Multilanguage.” The comments on the torrent listing seem to confirm this is the latest version of Photoshop and it is in full working order.
In order for this torrent to exist and the software to function, Adobe’s Creative Cloud validation has been either bypassed or cracked. It therefore seems reasonable to assume other applications in the Creative Cloud suite will also appear as torrents any time soon.
Depending on how the software validation has been cracked, will determine whether Adobe can stop cracked copies of its products from functioning. If the cracked copies still contact Adobe’s servers and somehow pass themselves off as valid, then expect that to happen. However, if these copies function without ever needing to contact a validation server, there appears to be nothing Adobe can do to stop them functioning.
Unfortunately for a company like Adobe, the web does make it easier to obtain pirated material and until the day when there is a rock solid way to make a product un-crackable, there will always be ways to pirate software.

Photoshop CC Cracked In Under 24 Hours Harshavardhan Reddy 2013-06-22T20:55:00+05:30 5.0 stars based on 35 reviews Adobe announced back in May, that it was set to drop it’s Creative Suite as a boxed product, instead the company decided to focus wholly ...
Share this with short URL Get Short URL
TechBuzz