Computex 2013 certainly had something to offer for everyone, whether you’re interested in software, gaming or gadgets, this year’s event had it all.
There were two things which caught my eye and I thought they would be a nice round up to what has been an action packed week in Taiwan. 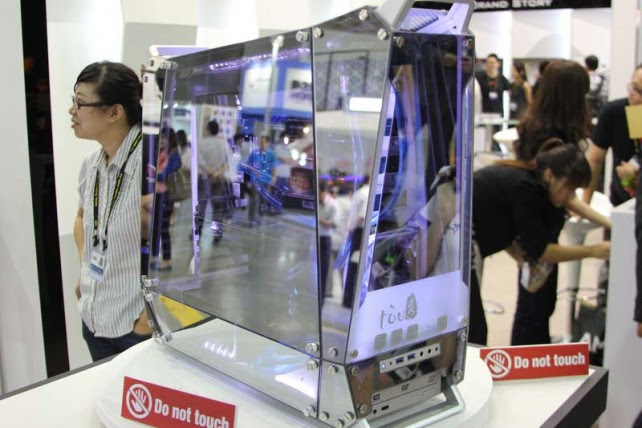 Watch out for sticky fingerprints on the Tou desktop case!
The first was the new desktop case from In Win. The company, who are based in Taiwan, are well know for their off-the-wall design in desktop cases but they really have broken the mould with the new model named Tou (this means “transparent” in Mandarin Chinese).
The ATX full tower has several 3mm-thick tempered glass panels that are screwed onto the aluminium structure. What really makes it stand out, is that it contains LEDs inside, which when switched on, enable you to see pretty much all of the desktop’s internal working parts. The LEDs can be controlled through the touch panel above the USB 3.0 ports on the front of the case. By turning them off you have the option of the desktop looking like a mirror.
A truly stunning piece of design! Unfortunately there are no release dates at the moment.
The second thing that caught my eye is something for all the Star Trek fans out there! It would appear that Acer have realised how much the Aspire R7 looks like the USS Enterprise. They have created a limited edition version of the touchscreen notebook, with a Star Trek theme. It comes with a Star Trek logo and a sand blast finished case. Also included are wallpapers, videos, a soundtrack and a film poster signed by the cast.

Only 25 of these special-edition models have been created and only one will be up for auction on eBay, with proceeds going to charity. The auction will run from June 14 to 24, so get it in your watched items!