Home Tips & Trickz How to “Green Up” Your Devices

How to “Green Up” Your Devices

Whether you’re looking to feel a little less guilty about poking at Mother Nature or you want to cut down on your electric bill (or both), it’s probably a good first step to green up the devices in your home that you have the most direct control of. You don’t even have to sacrifice a lot to get your devices into the green spirit. I’ll show you how you can do this and make it work in a way that will not demand a complete change of lifestyle!

The personal computer is the pinnacle of muscle power, but it also hemorrhages your wallet. The average computer uses anywhere from 65 to 250 watts per hour of continuous power. Its usage gets lower as you stress its components less. You can use this to your advantage. Here are some pieces of advice I have prepared for you to green up your PC:

1. Turn off your speakers when you’re not using them. One day I noticed that everything I put on my subwoofer got warm. This indicates that even while I don’t listen to music, there is electrical resistance going on in the hardware (hence the heat). If you’ve got a 5W set of cheap speakers, you might not make much of a difference, but if you have a 200W surround sound system with five satellite speakers, you’d end up saving enough money to buy yourself a new set every year by turning them off when you’re not listening to anything. There are exceptions where your system might automatically switch off until it is needed, but you’ll have to read your instruction manual for that, and there’s no chance you will have this feature if you use analog sound output.

2. Let’s state the obvious: Switch your PC and monitors off when you’re not using them. Set up both so that they go to sleep after a certain amount of idle time.

3. Game less. Gaming causes your graphics card’s GPU to fire up and suck more juice from your power supply. This may require as much as 400 watts of extra power, especially if you’re bridging multiple cards together. Instead of gaming, do something more productive!

4. Use your laptop when you can. The CPU and components on a laptop are made to squeeze out as little battery power as possible. Its design is an advantage when you’re trying to save electricity.

5. Pay attention to your hardware purchases, particularly those of the CPU and graphics card. Without sacrificing too much in terms of performance, watch for CPUs and GPUs that consume less electricity. In their spec sheets, there should be a category there for idle and maximum power consumption. Base your decision on both, then throw performance into the equation and compare what you must.

6. Need to browse the web for the latest scoop on some celebrity? Whip out the tablet or your smartphone. Those use up much less electricity to perform this task than the monstrous desktop PC in your study. Plus, you can walk around with your tablet or smartphone looking all stylish!

Greening Your Other Devices 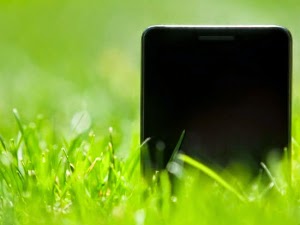 The average smartphone uses around six to eight watts of continuous power per hour. Your average tablet doesn’t use much more than this. So, you can’t expect massive savings from greening these devices up. In a dollars-and-cents analysis, a smartphone will cost you under a dollar per year to keep charging. The one reason why you would want to minimize power consumption is to get as much life out of your battery as you can. These devices guzzle down battery power in one or two days (tablets may even last as little as ten hours). Given these distressing numbers, let’s see how you can get the most out of one charging cycle:

1. Hang up the phone. Cut down on conversations and save the small talk for a personal meeting. If you don’t feel like doing this, fine. It’s not like the earth will blow up if you don’t follow this advice. Some people just need to get their talk on. It’s good for you, anyway!

2. Turn your phone off before you go to bed at night. Keeping the phone on 24/7 is something we’ve been used to since the Nokia 3310 days. But phones have changed phenomenally and battery life suffers as a result of it. Who wants to answer the phone in the middle of the night anyway? If you’ve got a land line and you don’t have emergencies to attend to at night (such as getting called into the hospital to look after patients) then people can still reach you and you can have a sound sleep. Do this also for your tablet.

3. Turn Wi-Fi off when you go out. Your phone or tablet keeps a list of public Wi-Fi networks that are in your area and is constantly looking for them even if you aren’t telling it to. If you connect to one of them automatically and the signal is poor, your phone will struggle to broadcast its information to the access point. This will drain your battery badly.