Home TechBuzz How Far Are We From Holographic Technology?

How Far Are We From Holographic Technology?

For years, display manufacturers have been making changes ranging from monumental to modest in the way that they present images. We’ve all grown familiar with the flat screen, which in its nascent days was a significantly high-tech innovation way in front of the old curved CRTs. Adding 3D into the mix excited some people and had many disappointed with its shortcomings. However, as the world of screens starts getting more interesting (with concave curved displays, 4K resolution, and several other panel innovations) it’s time to start thinking about how far we are from achieving a viable mass-production model for holographic technology. Will we even ever reach that point? Let’s speculate! 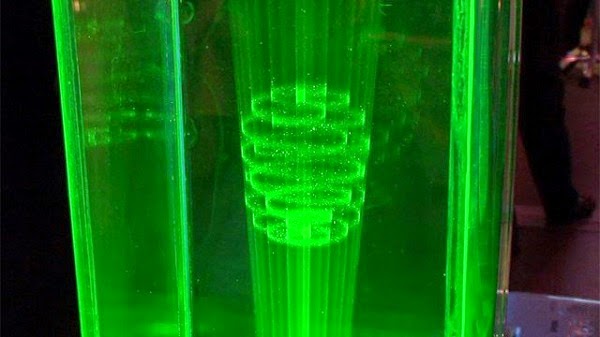 For most people, the word “holographic” implies having the ability to display an image much like how R2-D2 displayed an image of Princess Leia in the fourth episode of Star Wars. In other words, “holographic” immediately brings the words “3-D projected object” to people’s minds.

But what about holographic screens?

The above image is a real-life example of a holographic screen, where a video projector shoots light at a specially-coated piece of glass to show you a translucent image on a screen. If we define “holographic” like this, then we already have the technology. The former definition of “holographic” mentioned in the first sentence is more true to the word, though.

How Is An Image Produced?

For a holographic image to appear at all in a cohesive manner, we have to somehow stop light in its tracks at some point. Each pixel is a point in space rather than a dot on a screen, so the light reaching that point has to willingly stop right there and just shine on to produce one part of a greater three-dimensional image. So, how do you tell light where to “stop?” This dilemma was solved, believe it or not, during the 1940s by Dennis Gabor, a Hungarian-British physicist who was working on a way to improve electron microscopes. His technology is still in use today, but it’s an entirely different thing to apply his work to an optical display.

His method of holography used a form of radiation too dangerous for us to be exposed to. But since we’ve invented lasers, we can actually direct light in much more interesting ways. So, currently, there are two mediums that can be used to generate a hologram: lasers and plain old light.

Lasers are probably the easiest to use, since they can be controlled with surgical precision in the air and don’t waver in wavelength. In the chief method of holography, two lasers are fired, interfering with each other at many different points. This creates three-dimensional “pixels” where the light at the point of intersection is much more intense than one particular laser’s beam.

Right now, holograms exist. There are companies experimenting with it and many R&D departments trying to make it work for consumers. Currently, there are very few easy ways of making this happen, often resulting in costs that are too high for most consumers to undergo for a novelty no one is really producing images for.

For now, holograms are used to render still images rather than recorded video or three-dimensional animations. Aside from the cost of adding in holographic capabilities to an otherwise healthy and entertaining 4K display, there’s also the standing danger of getting retinas damaged from a possible laser burn. We’re not talking about high-powered lasers, but that doesn’t mean that prolonged exposure to them doesn’t carry consequences.

Making the technology work would require some sort of other medium that doesn’t need an intricate series of plates and lasers to operate. Let’s also consider for a second how expensive it must be at present to actually record video suitable for holographic projectors.

Perhaps it’s more feasible to trick the eye into thinking that an object has more depth than it really has. I’m not talking about stereoscopic images. This is already present in 3-D systems. Rather, I’m talking about a system in which a projector shoots an image at a mirror, which then relays its reflection onto a tilted screen. There was a concert by Snoop Dogg back in 2012 in which the late Tupac made an appearance through this kind of technique. This technique is currently employed in advertising and perhaps it won’t be long before a company develops one of these displays targeted at enthusiasts.

So, will we have true holographic technology any time soon? Perhaps, if the billionaires of the world (I’m looking at you, Google!) spill a little bit more cash to research it. We already have rudimentary forms of holography and “sort of” holography, so who’s to say it’s impossible for something like this to appear in our homes in the future?

Honestly, it doesn’t look like we’ll be seeing such systems fully developed in the next five years, and I’m not sure enough people even want such a thing. Let’s gauge it, though, shall we? Comment on this article if you have an opinion one way or the other about holograms!

How Far Are We From Holographic Technology? Harshavardhan Reddy 2014-05-14T14:58:00+05:30 5.0 stars based on 35 reviews For years, display manufacturers have been making changes ranging from monumental to modest in the way that they present images. We’ve all ...
Share this with short URL Get Short URL
TechBuzz