The MaxStone Kickstarter Project is a remote iPhone and digital camera shutter.  This new project is hoping to combine some popular recent gadget trends with normally sought after pro DSLR photography features for a Bluetooth connected gadget, that is distinctive and more multitalented than others in the same category. The MaxStone is a Smartphone controlled camera shutter, Bluetooth device locator and remote Smartphone shutter trigger in one device. 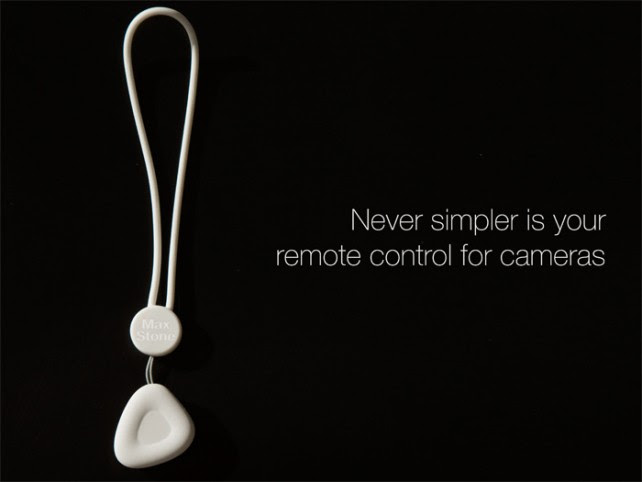 The device is a small tool powered by a solitary watch battery, which is attached to your camera via a straightforward loop strap. It connects in such a way that it covers the camera’s shutter button and has a small, pebble-like main body in front of your camera’s IR sensor. This contains an IR blaster that connects to your Smartphone via Bluetooth, to enable you to trigger the camera’s shutter remotely from your device. The simplicity of the device means MaxStone is much more compatible with a variety of camera models and brands.
There are a variety of applications to the device.  You can either trigger the camera’s shutter instantly or via time delay or you can even program it to take photos at intervals for time-lapse photography spanning nearly a year, according to the firm’s Kickstarter page and you can maintain operation even if your phone is powered down or loses a connection. It can also handle simple video recording operations on certain models of camera.

These features alone would be impressive in a tool that is priced at $29 for a starting pledge.   The Maxstone also offers a Bluetooth proximity alarm sensor, which makes it possible to receive alerts if you move away from your camera, or whatever else it’s attached to. It can also be used in a kind of visa versa way, to locate your phone, as it triggers an alert on your device when you press the button. Did I mention it could also operate as a remote shutter for your iPhone camera too? Which is vitally important for those of us who are of the Selfie generation.
The MaxStone was created by Will E and Lia Zhang, a husband and wife team who created the original prototype and design. Radio engineer Will Griffith helped refine the RF communications technology and Shawn Han has developed and continues to build the MaxStone iOS application. The team is based in New York-based and they are seeking $50,000.  The company has already raised around $6,500, with a just under a couple of months left in their campaign. The firm plans to ship the MaxStone by March, 2014.