Bringing something to life through the power of lightning sounds more like a theme from a novel or movie but scientists  have been able to charge a mobile phone with the help of a lightning bolt.

Scientists from the University of Southampton have got together with Nokia and carried out a proof-of-concept experiment. It is hoped that by harnessing this natural power source, areas with a short electricity supply could use this as an alternative energy source. 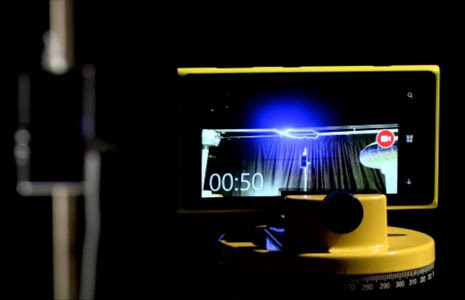 The team used a transformer to recreate a lightning bolt in the laboratory by passing 200,000 volts across an 11-inch air gap.

“We were amazed to see that the Nokia circuitry somehow stabilised the noisy signal, allowing the battery to be charged,” said Neil Palmer, from the University of Southampton’s high voltage laboratory. “This discovery proves devices can be charged with a current that passes through the air, and is a huge step towards understanding a natural power like lightning and harnessing its energy.”

Do Not Try This At Home

“We obviously aren’t recommending people try this experiment at home, but we are always looking to disrupt and push the boundaries of technology,” said Chris Weber.

But for the mobile industry, finding ways of charging and improving batteries is a priority. Ben Wood from the analyst firm CCS Insight, thinks that they are on to a good thing with this breakthrough.

“Nokia has been among the forerunners of device-charging technology for some time. It’s also very committed to caring for the environment. So it’s perhaps not surprising that the company’s involved in what might appear to be a wacky idea.”

He also thinks that it could benefit those living in rural areas.

“If you live in a remote village in India you might welcome the possibility of a communal device that charges phones.”

Scientists Charge Nokia Phone With Lightning Harshavardhan Reddy 2013-10-04T03:17:00+05:30 5.0 stars based on 35 reviews Bringing something to life through the power of lightning sounds more like a theme from a novel or movie but scientists  have been able to ...
Share this with short URL Get Short URL
TechBuzz