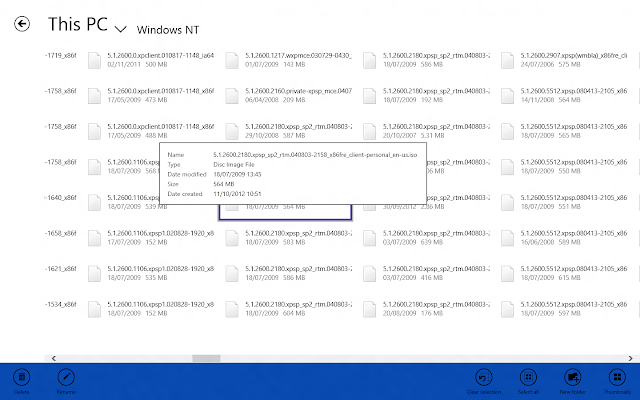 We're still about two and a half months away from BUILD 2013, but Microsoft continues to spill the goods early. A few weeks ago, the internet welcomed a leak of the Windows 8 'Blue' update with open arms. Since then we've learned a lot about the update, including its real name, and now a newer copy of the OS has leaked revealing even more goodies.


It's been about half a day since Windows 8.1 build 9369 surfaced online, and savvy members of the press have already picked out all of the new additions to the software. The big new addition is one of the most requested features since Windows 8 debuted — a Metro file explorer (seen above). Simply dubbed 'Files', the app finally lets you manage your files without having to leave the Metro experience, giving you the ability to cut/copy, rename, delete, and move files. The app also integrates with SkyDrive, allowing you to switch between your local and cloud storage easily.

Two more noteworthy changes come in the Settings area. For those with a laptop, there are new trackpad settings which allow you to turn on or off edge gestures and change the scroll direction (for you Mac converts) at your leisure. Then there's the new Search features, which reveals its ability off suggestions from the web and filter results based on Bing's SafeSearch properties. You can also of course disable web results.

Lets the Beta Preview Below:

New build of Windows 8.1 leaks, reveals Metro file explorer and touchpad improvements Harshavardhan Reddy 2013-04-18T15:52:00+05:30 5.0 stars based on 35 reviews We're still about two and a half months away from BUILD 2013, but Microsoft continues to spill the goods early. A few weeks ago, ...
Share this with short URL Get Short URL
TechBuzz