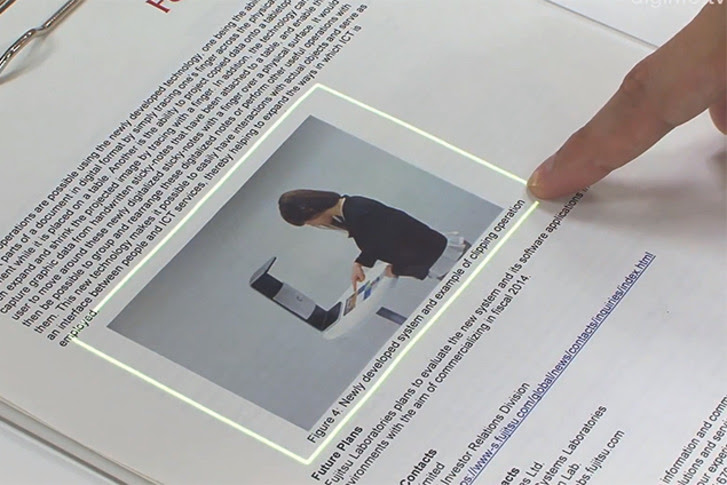 How would you like to be able to digitally save an image or a block of text from a book or a magazine with just a touch? This is now possible, with the help of an innovative interactive interface technology from Fujitsu called the FingerLink Interaction System.
The technology consists of interactive touchscreen which is overlaid over real objects, such as paper, for instance. The Fingerlink prototype uses cameras, projectors and a scanner, reading the movement of your fingers on its interface. The camera and projector are linked by special image processing software from Fujutsu. With this tech, you are able to capture the information you want from a book or newspaper and import it as digital data, with just the swipe of a finger.


The system can detect your fingers’ movements with accuracy as you touch the printed material and it allows you to copy any images or text, which you can then project elsewhere. You can easily adjust the size of the projected image with the same finger motions.
Let’s say you want to quickly extract a picture or a block of text from a magazine. You just have to press with a fingertip in one corner of the image or the paragraph you are interested in, drag to the
other corner and then lift. The system’s off-the-shelf camera can recognize height so it will have a different response when your hand is further away or closer to the magazine. Moreover, the Fingerlink can adjust color and brightness settings for differences in hand color, in order to accurately identify fingertips.
The technology also works with objects shaped irregularly, such as the pages of a book, which are generally convex. It  recognizes gestures that do not actually involve touch, such as for instance, manipulating 3D computer animated objects.
Fujitsu is planning to continue improving the system, in view of releasing a commercial version for sale in 2014. As for possible applications, there could be several, including the processing of 3D CAD data. The Japanese manufacturer also thinks the technology could be successfully used to display detailed information at a travel agency or for filling in forms at City Hall. The Fingerlink could also be used by libraries to digitalize their volumes, and especially the rare ones, so as to give access to a higher number of students.

FingerLink Turns Paper into Interactive Interface Harshavardhan Reddy 2013-04-26T16:59:00+05:30 5.0 stars based on 35 reviews How would you like to be able to digitally save an image or a block of text from a book or a magazine with just a touch? This is no...
Share this with short URL Get Short URL
TechBuzz