We have been hearing rumors about the new successor of the Samsung Mega series for quite some time, and now it seems like Samsung is finally pulling up its sleeves and getting ready to launch. Recently, the Galaxy Mega 2 has had most of its important specs leaked because a pre-production unit has been put through the paces of a well known graphics benchmark. It is said that the handset maker might offer a plus-size device with a budget-friendly price tag. 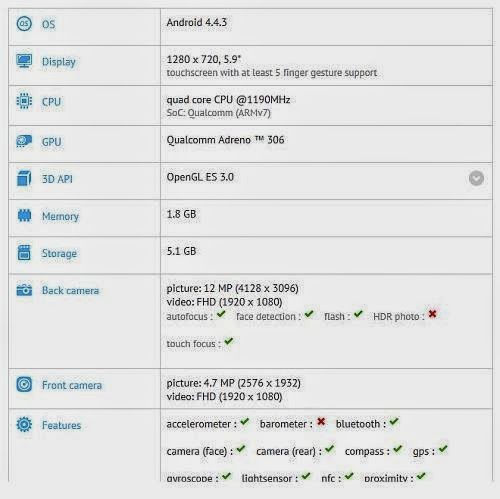 Benchmarks on GFXbench disclosed a 5.9-inch display that targets a low to mid-range market, though earlier rumors suggested that the new device will sport a 6″ display (a slight difference). However, Samsung has maintained the same resolution as its predecessor at 1,280 x 720 pixels.

It is likely that the new Mega 2 will be Samsung’s first smartphone to run on 64-bit processor with a Qualcomm Snapdragon 410 quad-core chipset. There are also rumors floating that the new Samsung Mega 2 may run on Android L. Galaxy Mega 2 will  have 720p HD resolution, 2GB of RAM, 8GB of internal storage, a 12 MP rear camera, and a 5 MP front shooter for selfies.

Other Galaxy Mega 2 features listed on GFXbench includes accelerometer, barometer, Bluetooth, gyroscope, compass, GPS, light sensor, NFC, proximity sensor and Wi-Fi. Apart from these features not much is known about the phone’s specs or when it will be released. It is said that with the Mega 2, Samsung is trying to introduce  low-end Note-like phones in the mid-range segment.

Samsung Galaxy Mega 2 Specs Leaked Harshavardhan Reddy 2014-07-02T17:48:00+05:30 5.0 stars based on 35 reviews We have been hearing rumors about the new successor of the Samsung Mega series for quite some time, and now it seems like Samsung is finall...
Share this with short URL Get Short URL
AndroidNews
TechBuzz