How many times has your auto-correct failed you while texting?  While these mishaps are occasionally humorous, it can also be quite frustrating. If you are someone who is known for sending misspelled text message due to an undesirable auto-correct program, or just large or clumsy fingers, there is now a revolutionary new app designed for your benefit. 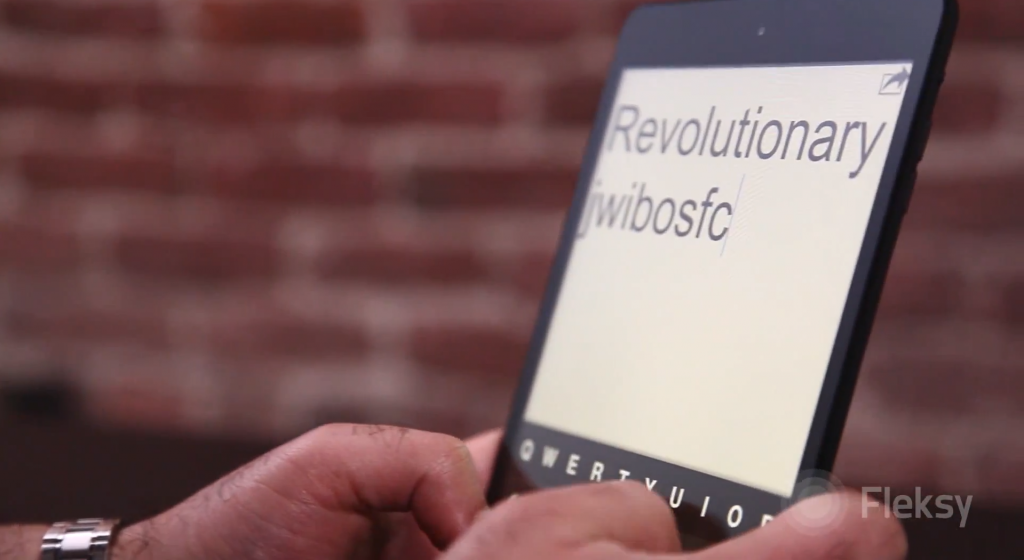 A new writing prediction program for touchscreens, Fleksy, was created by Syntellia. The app started out as the virtual keyboard Blindtype, and brought innovation and technology to people with disabilities, specifically the blind and individuals who are visually impaired.  This forecast engine can also be of assistance to all people who have trouble correctly typing on smartphones and tablets.

The Fleksy Keyboard
The keyboard’s layout uses the standard QWERTY design for user familiarity. This technology doesn’t require any degree of accuracy by the user. By just tapping on the screen, Fleksy can detect what the user meant to type by analyzing context and typing patterns, even if entire word is scrambled or every single key is mistyped.  This software out performs similar technology on the market today in both speed and accuracy.  This remarkable app allows the user to literally close their eyes or focus their eyes on something else entirely, while still managing to send a perfectly spelled text.
Kostas Eleftheriou, the Syntellia co-founder and CEO, explains. “Typing is still the biggest frustration for customers using smartphones and tablets. The result is that some people won’t buy a touchscreen device, and others won’t use their devices nearly as much as they could. It’s actually the biggest barrier to smartphone and tablet adoption right now,”

Availability
Fleksy’s alternative keyboard app is now a free download on iTunes and is available on iOS and in beta on Android. Currently, Syntellia is launching a beta version of Android in Spanish that is now open for testing enrollment.
So, now you can say goodbye to the accidental misspellings and indecipherable texts. Could this be the best thing to hit the cell phone market since the touchscreen itself?

Fleksy Makes Texting Easy Harshavardhan Reddy 2013-02-05T22:50:00+05:30 5.0 stars based on 35 reviews How many times has your auto-correct failed you while texting?  While these mishaps are occasionally humorous, it can also be quite frust...
Share this with short URL Get Short URL
TechBuzz