Turn Photos and Videos into GIFs with PicGIF for Mac

Have you seen the small GIF videos on social networking sites and want to make your own with your photos and videos? It’s a job made much easier with the app PicGIF Lite. Trying it out, I was able to make an animated GIF in less than five minutes start to finish, and you can too!
Importing 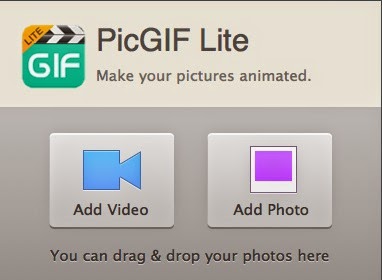 The picGIF app accepts many different image formats and all common video formats. The app says you can drag and drop onto the pop up screen on opening the app, but it wouldn’t allow me to do this. However, I was able to work around it by just choosing “Add Photo” or “Add Video” in the File menu, or by doing “Command + O” or “Command + D”, respectively. Even though it says “Add Photo,” you can add in multiple files at once.

Once you have added the photos, you have several options to customize the gif. Under the “Properties” menu in PicGIF, you can change the size of the output or keep with the default of 360 x 240 pixels and can also choose whether they will be presented portrait or landscape. At the bottom, you can also choose whether you want it auto optimized for quality or whether you want better quality, which will of course take longer.

Next is deciding how it will handle the photos if they don’t match the exact size of the output, whether you want them sized to fit, stretched, etc., and to choose a background color for when they don’t fit. Speed is the next option to be determined, either to leave it on Auto or to set the speed yourself. The photos will either be in the sequence you added them in or you can choose to have it go in reverse.

In the “Effects” menu, you can choose among popular options – Original, Vintage, Marcato, and B&W. After you make your choice, you can set the bars for Saturation, Hue, Exposure, Contrast, and Brightness. These are much like you would find in your standard photo apps.

Hit the play button to test your GIF, and if it’s to your liking, click “Create GIF”. It literally only took seconds to create my GIF, but I only had six pictures and left it at the default size.

There aren’t that many options for creating video GIFs. Actually there are, but you need to buy the full version app for $4.99. For this price, you will be able to trim the video as you wish, add text, and add stickers. By sticking with the free version you are limited to either having it autoplay or changing the frames per second. You can also import existing GIFs and edit them. Saving this gif took longer than with the photos, but I was using a longer video.

If it’s your screen capture you’d like see in an animated GIF, Conclusion

Turn Photos and Videos into GIFs with PicGIF for Mac Harshavardhan Reddy 2014-04-06T14:26:00+05:30 5.0 stars based on 35 reviews Have you seen the small GIF videos on social networking sites and want to make your own with your photos and videos? It’s a job made much e...
Share this with short URL Get Short URL
Apple
Tips & Trickz