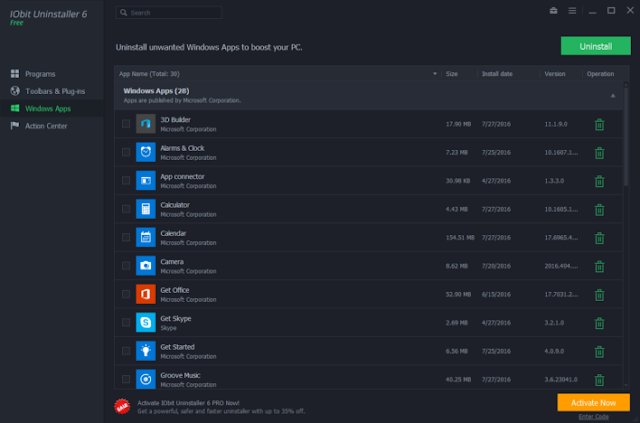 The rollout of Windows 10 was interesting, to say the least. While a lot of Microsoft devotees eagerly anticipated the new operating system before its launch, the reality of it left a lot of tech users reaching for their torches and pitchforks. They felt arm-twisted into accepting automatic updates and upgrades, while mourning the loss of some of even the most basic features, like good old-fashioned Solitaire.

Uninstaller 6 helps rid your Windows machine of those additional features that slow things down or chew up space.

But here’s the problem: uninstalling built-in programs can leave your system operating at less-than-ideal functionality if you don’t know what you’re doing. That’s why IObit gives you a complete list of programs to remove before you check them off, meaning you’re less likely to delete something critical and end up ruining your operating system.

What else is new in version 6?

Besides the ability to target Microsoft Edge plug-ins and extensions for removal, this version contains a larger database of known malicious and ad-based plug-ins so you can wipe those out, too.

The uninstaller keeps a close watch for program features that you might not want, then alerts you to their presence so you can take action

IObit Uninstaller Saves Windows 10 Users Harshavardhan Reddy 2016-08-29T14:04:00+05:30 5.0 stars based on 35 reviews The rollout of Windows 10 was interesting, to say the least. While a lot of Microsoft devotees eagerly anticipated the new operating sys...
Share this with short URL Get Short URL
TechBuzz