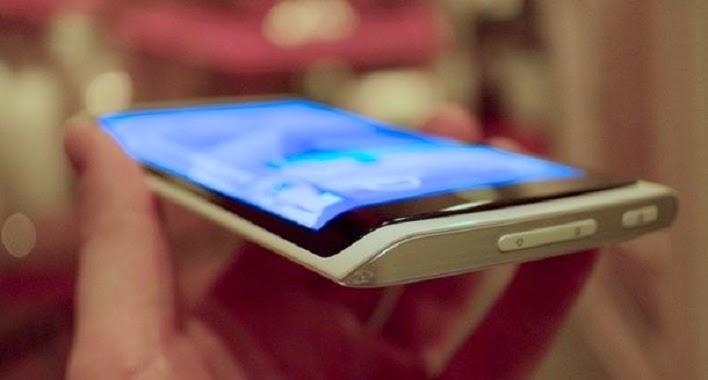 Samsung has been looking for ways to differentiate from other mobile businesses, testing out devices like the Galaxy Round to see if customers actually want to try out a different style. The next step in the madness could be a three sided display, something Samsung is testing internally.
The three sided display has been shown off in leaks before, but this is the first time we have heard it will come to market. Executive manager of Samsung’s Wireless Business Division, Kim Hyeon Jun, said they were planning to unveil a smartphone flagship innovation in display.

It is unlikely we will hear about it until the end of the year, according to reports Samsung has only just started to get familiar with the manufacturing process. The three sided display might allow the screen to fold into the sides of the device, allowing on-screen volume buttons.

This would make the need for a removable back even higher, if the sides of the device are now display. SIM and microSD cards would both have to go into the back of the device, alongside any other cards added to the phone.

It is an interesting concept, one we have seen on the iPhone 6 and other smartphones. Samsung appears to be the only manufacturer willing to try the three sided display on an actual commercial smartphone, we doubt it will be on any of the major Galaxy lines.

Like the Galaxy Round, experimenting could bring some hype and revenue to the new idea. The LG G Flex managed to make it onto carriers in the United States, but reports say the flexible smartphone did not sell well in the US,

South Korea will be the first country to see the new three sided display. Samsung’s hometown is more welcoming to wacky ideas and gives them an easy way to distribute. Whether anyone will care about the three sided display is another issue.

Samsung Working on Three Sided Display Harshavardhan Reddy 2014-08-22T11:15:00+05:30 5.0 stars based on 35 reviews Samsung has been looking for ways to differentiate from other mobile businesses, testing out devices like the Galaxy Round to see if cust...
Share this with short URL Get Short URL
TechBuzz